When you've been in the business as long as Mike Guthrie and the guys it adds up to a lot of trade years. Originally from Barry, Mike has many satisfied clients that continue to forward recommendations. Mike says he quite often ends up doing work for the wider circle of friends and family. He remembers one job that started out more as a favour, fixing some roof slates for an elderly neighbour. Her son was so happy that Mike had helped out his Mother that he brought Mike in to sort out his garage conversion. This led to a cousin having a kitchen extension built and their neighbour also wanted the same extension building. The neighbours best friend took Mike on to convert his loft, this was out of Barry and in the Vale village of Rhoose. That all started a new string of customers in Rhoose. Which culminated in Mike moving out to Rhoose himself.

Although Mikes construction team can be found working on projects all over Cardiff and the Vale of Glamorgan you're always sure to find them working on jobs in Barry during any year. We've selected out some photographs of types of work Mike has carried out in the Barry area. Builders survive and thrive on referral work. 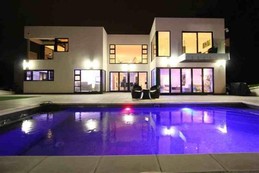 Take a look at some of our recently completed projects!